HOW TO CRACK GMAT Critical Reasoning?

The most common question that crosses every aspirant’s mind is- HOW TO CRACK GMAT?

Graduate Management Admission Test, popularly known as GMAT is a comprehensive 3.5-hour test to evaluate the analytical, quantitative, and verbal skills of an individual for admission to various MBA colleges abroad. Developed by GMAC, GMAT is known as GMAT CAT because it is computer adaptive.

Unlike all other examinations, GMAT is based on the ability of the test taker, and the level of questions rises gradually. Hence, it is of utmost importance that one is well acquainted with the pattern of the paper to score well.

HOW TO CRACK GMAT VERBAL?

GMAT Verbal Section is undoubtedly one of the sections which many students are not very comfortable with. It is of utmost importance to develop a strategy to handle the GMAT Verbal Section with ease. GMAT Verbal Section comprises of three sub-parts – Sentence Correction, Reading Comprehension, and Critical Reasoning. Follow the below-mentioned guidelines, and you’ll be satisfied with your GMAT Verbal Score.

Let us now take a look at how to improve GMAT verbal score:

One often doesn’t practice much when it comes to the verbal section assuming that basic command over the English Language is all that is needed to score well in the verbal section. Grammatical Knowledge and approach for handling passages come with practice only. Practicing Reading Comprehensions and Sentence correction daily will surely shoot up your score to a great extent.

Undoubtedly, a good score in the quantitative section is dependent on a lot of practice, but at the same time, verbal shouldn’t be neglected. And, as far as the total score is concerned verbal is known to contribute significantly to the overall score. Unlike others, one should aim to balance the score between Verbal as well as quantitative section.

3) BE THOROUGH WITH CONCEPTS

As far as GMAT Verbal is concerned, focusing on the techniques and concepts helps. Rather than sticking to learning hundreds of idioms, one should first aim to master the idea of sentence correction. Similarly, understanding various techniques for solving reading comprehensions accurately is a must. 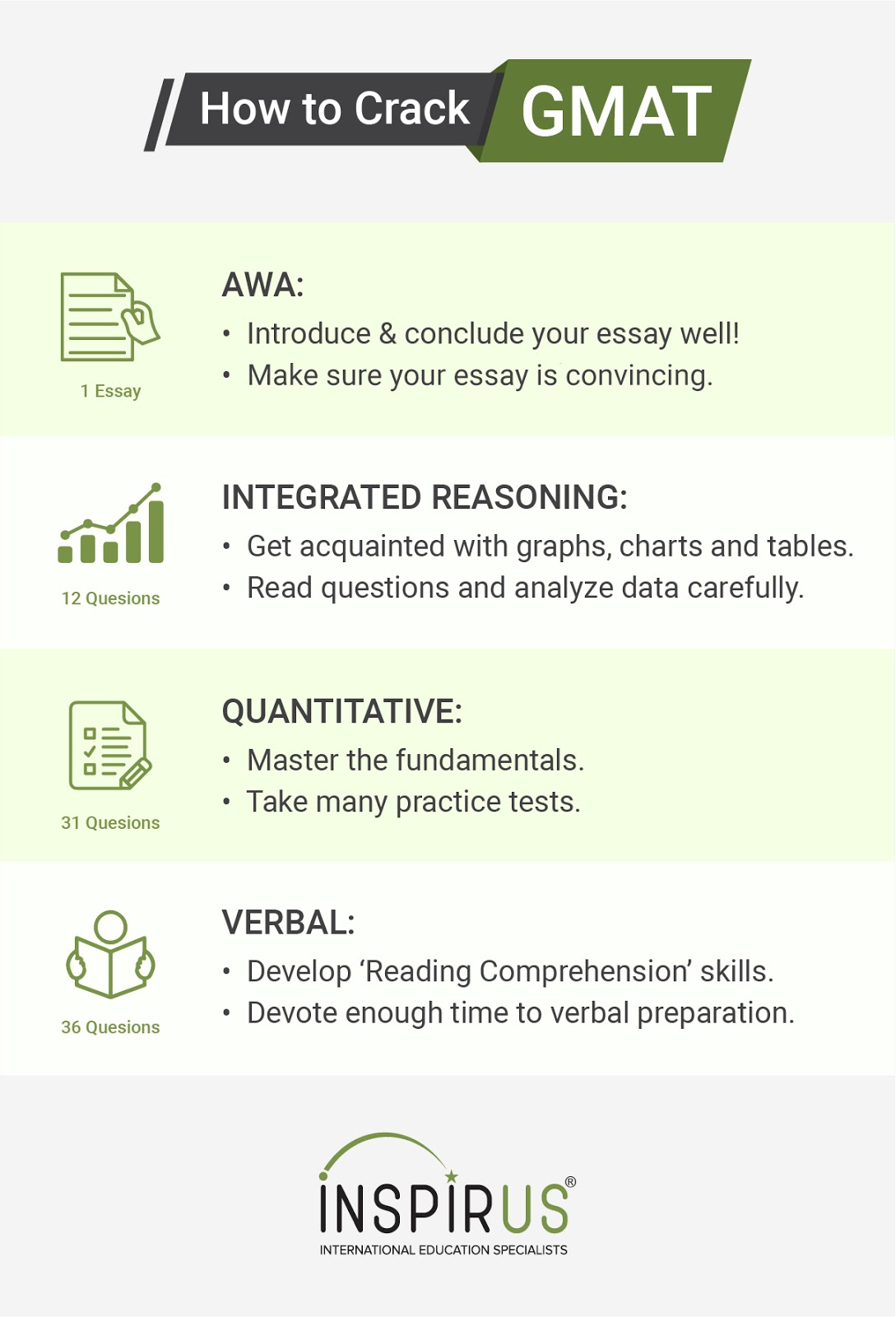 HOW TO CRACK GMAT CRITICAL REASONING

The critical analysis questions are typically of 5 types:

These questions ask you to choose the statement or piece of evidence that would support or bolster the argument given in the passage. The best way to crack it is looking for the main argument of the passage and then choosing the best option that provides the best evidence to the argument.

The Strengthen the Argument question may be worded as-

The answer to this question type should not only be directly relevant to the particular argument in question but also provides a specific piece of information that justifies the argument.

2. Weaken the argument/ finding the flaw –

These questions would ask you either of the following-

Weaken the Argument question may be framed as-

These questions ask you to draw conclusions based on the argument.

The Inference questions may be worded as-

It is pertinent to note that the conclusion must be drawn only from the information given directly in the passage.

A Find the Assumption question may be framed as-

A Paradox question may be worded as-

HOW TO CRACK CRITICAL REASONING IN GMAT

For instance, in paradox questions, you look for a new piece of information that mostly resolves a ‘contradiction’ while in the inference questions, you are looking for inference or conclusion that could be drawn from the argument given.

For instance, in weakening the argument question type, you’ll need to start by identifying the main argument of the passage and then looking for an answer choice that provides an exception to the given argument or contradicts it. If the question asks you to find select an answer choice that will support the given arguments then after identifying the main argument of the passage, you’ll have to look for an option that bolsters the argument.

Following the above tips will surely help you to crack the critical section in GMAT.

HOW TO PREPARE FOR GMAT REASONING QUESTIONS:

Every argument contains a proposition which is an underlying logic of an argument, one or more assumptions on which it is based and one or more conclusion; the statements supported by premises. Labeling the premises, assumptions, and conclusions in each practice question will help you to isolate them quickly; helping you to improve time and performance.

FAMILIARIZATION WITH THE EXAM

As a test taker, it is imperative that one knows about the pattern, format, and type of questions that are asked in the exam. You must know everything about what is the GMAT exam. This not only helps in preparation but also enables one to strategize accordingly.

The GMAT exam can only be given through a computer. However, there are no technicalities involved as such if one knows the basics of computers. But many of us still aren’t aware of the term ‘Computerized Adaptive Testing.’ This testing procedure comprises an algorithm that evaluates the student’s relative score depending upon the questions of various difficulty levels. This testing procedure is only followed in two sections, i.e., the Verbal and quantitative sections and disables one from calculating the score that one may expect.

GMAT is undoubtedly not that kind of an exam wherein just knowing about various concepts will help you fetch scores. Being pro at solving a mathematics problem doesn’t ensure that one will get a good score in the quantitative section. Instead, one should be habitual of solving different sets of questions that are specific to the GMAT, and this can be done only through Diagnostic Practice Tests. Doing so helps you analyze the areas where one can generally go wrong and ensures that all those mistakes aren’t repeated during the actual GMAT exam.

Cracking GMAT is undoubtedly not a day’s task. One needs to be familiar with the format of the paper so that it is easy to set hands on the paper on the day of the actual exam. Only preparation of the topics for the exam won’t suffice if you aren’t aware of the format and other associated conditions of the GMAT exam.

One of the best ways for establishing a comfort level with the format and pattern of the exam is through ‘Practice Tests.’ Giving them section-wise and strictly according to the time makes one habitual of taking the exam.

COMMON TRAPS THAT PEOPLE FALL INTO

To crack critical reasoning in GMAT, only familiarization with the exam isn’t enough when it comes to competitive exams like GMAT. There are few common mistakes that many of the test takers do and ultimately end up spoiling their entire GMAT score.

Habitual with the previous education system, many test-takers when stuck at a question try to solve it until they get an answer or guess it randomly, which should not be the case. GMAT is a competitive exam which is designed to test the skills of an individual and is not about getting every single question correct.

Allot some specific amount of time to each question, if unable to solve, try to apply the elimination technique to it. Otherwise, moving onto the next question is the best idea. Follow this tip and you’ll surely crack GMAT with a good score!

2) NOT JOTTING DOWN THE IMPORTANT THINGS

There’s no doubt in the fact that the GMAT is a time-bound exam, and one should try to save time in every possible way. However, this should not be done at the cost of accuracy. Noting down the essential things of reading comprehension, or the data of the reasoning questions helps avoid silly mistakes that otherwise may occur.

But, to do so in the actual exam, one needs to develop this habit over some time.

3) ASSESSING THE LEVEL OF QUESTIONS

If you follow all the above tips properly, you are bound to get a good GMAT score.

Now that you know how to crack critical reasoning, are you ready to begin?