Bakhtawar Krishnan is an accomplished professional in the field of higher education related to overseas study. She brings with her 30 years of diverse experience, both at the national and international levels, in different roles across industries. Over the last 5 years, she has carved a niche for herself and earned a solid reputation in the field of international education. In her wide-ranging career, Bakhtawar has helped hundreds of students realize their dreams of studying in prestigious international universities. She has several stories of successful top placements to her credit, at the core of which lies her deep sense of love and commitment for students and an unflinching passion for education. Bakhtawar believes in providing personalized student attention and actively engages with students to help them select the most appropriate university and courses, in line with their aspirations. Her innate ability to relate with students is supported by an enthusiastic and dedicated team of expert counsellors and teachers at Inspirus. The unparalleled dedication of this team enables the highest quality of educational coaching and counselling to be imparted to students to enable them to realize their vision of an international education.

Our team is well traveled extensively across the U.S and other countries and has done thorough research in the field to help students make an informed decision about their academic and professional future. 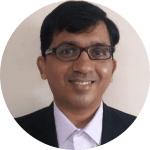 Mr. Sanjay Agarwal
VP – OPERATIONS
Sanjay is a passionate counselor and mentor for the past 15 years. He has over the years counseled, trained and mentored 6000+ students for various programs, such as MBA, MiM, MS and UG. Many of his students have achieved high scores on their tests and got admitted in top universities and B-schools across the globe. Before joining Inspirus Education, he had worked in senior and topmost positions in well-known study abroad organizations. He helms operations in Inspirus. He is service-oriented and keeps the interests of students above all. He has done Masters in Business Administration and is married with two kids. When he is free, he likes reading fiction and non-fiction books. You can approach him for an unbiased counseling session at sanjay@inspiruseducation.com.

Mr. Abhinav B Gogoi
VP – BUSINESS DEVELOPMENT AND OUTREACH
Inter-disciplinarity, internationalism and “Education without Prejudice” are values that Abhinav adheres to strictly. He is a multifaceted personality, who is an IB graduate from Mahindra United World College of India, and completed his higher studies at Jacobs University Bremen and University Bremen (Germany) in Marine Geosciences and Climate Research. He has traveled extensively around the world, doing multiple research projects across the Arctic and Antarctic and other oceans and seas of Europe, primarily working in climate research. During his time in Europe, he also worked extensively in the TESL, TEFL, GMAT / GRE Test Prep with multiple organizations. He was keen to give back to the communities that have structured his holistic growth – hence, he joined his alma mater, The Assam Valley School as the Head of Careers Department, teacher of Environmental Sciences as well as Theater and Dramatics. He also passionately partakes in the regional film and theater industry of Assam, time permitting. More importantly, his penchant always lay in creating a holistic education and career guidance support system for the children of India. He brings with him a decade of experience from Europe and across India to career guidance and test-prep. He is known to be experiential in his strategies, works without any prejudice, very proactive and approachable to his students.

Mr. Yash Patel
SENIOR ADMISSIONS COUNSELOR – PG
Yash is an accidental telecommunications engineer from D. J. Sanghvi, Mumbai, who went to Virginia Tech, USA for his MS in Industrial Engineering: Operations Research. Having been through the process himself, he understands the challenges faced by anyone trying to plan their further education abroad and all the parameters that should determine that decision. He has helped hundreds of students with their application processes over the years. His mentees have received admits from top universities of the world like Dartmouth College, Brown University, Cornell University, University of Pennsylvania, London School of Economics and Political Science, University of Melbourne, University of Toronto, the University of British Columbia and the National University of Singapore, among others. He is certified by UCLA as a Career Counselor and has entrepreneurial experience in the healthcare and construction industries.

What makes us stand out:
We are ‘independent education consultants’. Our team consists of well-travelled counsellors who have rich and diverse experience in this field and have counselled thousands of students. We give unbiased advice keeping in mind the student’s needs and what works best for the student.